A small selection of my records

It all started with my parents’ record collection. When I was very young, they loved to listen to lots of music and the bulk of their music consisted of classic rock records. They weren’t really fans of the popular music of the ’80s and they weren’t big on country. Since they spend a good chunk of the ’80s in northern British Columbia, they didn’t invest in a lot of new music. The records from their teens and twenties stayed on the turntable and the music of Beatles and Elton John became the soundtrack of my early childhood. One of my earliest memories is of dancing to “Obla-di Obla-da” (a very danceable tune, if I may say so). Each year, my mom would play “Birthday” on our birthdays.*

As I grew older, I developed my own appreciation for the music of the past. I was a quirky teen and I had little interest in Britney Spears, N*Sync, the Backstreet Boys, or any of the other radio fare of the late ’90s and early ’00s. I formed somewhat of an obsession with the Beatles. Many girls around that time became obsessed with boy bands. In a way, I was no different – I just got obsessed with a band that girls fawned over two decades before I was born. It’s not that I was in love with Lennon or McCartney; I just loved their singable melodies and creative lyrics. While many girls my age were hanging posters of Justin Timberlake and Nick Carter on their walls, I started tacking Beatles quotes around my walls. I also read every book I could find on the band and listened to their music on repeat for the better part of a year. The Beatles were somewhat of a gateway band to other music. I started listening to my parents’ records on my own, exploring the other artists in their collection, such as the Rolling Stones, Led Zeppelin, Jim Croche, and Paul Simon.

I received my first record as a gift for my 16th birthday.** It was a copy of “Electric Ladyland” by the Jimi Hendrix Experience. I listened to it on repeat, closing my eyes and getting lost in Hendrix’ guitar solos. The record launched my own vinyl collection. We didn’t have any record stores in Campbell River, so I browsed through the offerings in thrift stores and garage sales. The pickings were usually pretty slim, but I did manage to find a lot of interesting classical selections and got a few great deals, including Pink Floyd’s “Dark Side of the Moon” and “The Wall.”

I frequented record stores whenever we went out of town. I scoured through the bins at The Turntable and Ditch Records whenever we went to visit my aunt and uncle in Victoria. Shopping trips to Nanaimo always included a stop at Fascinating Rhythm. My collection grew quickly. At the time, vinyl was still somewhat of a geek obsession. Record stores resembled Rob Gordon’s shop in “High Fidelity”; they were full of music nerds obsessing over rare titles, posters and flyers for local shows plastered all over the walls and cash register area, and surly employees/owners who knew more about music than you could ever hope to learn.*** Few people who weren’t true music fans had any interest in records and people were still unloading their collections from the ’60s and ’70s, which meant that vinyl was much cheaper than CDs at the time. I loved classic rock, folk, jazz, blues, and classical, which meant that most of the music I enjoyed was first released on vinyl. This gave me a cheaper source for my massive collecting habit. Music downloading became popular around that time, but mp3s weren’t tangible. Records were big and that made them somehow real to me. Besides, anyone could type a song or album title into a search engine; it took real effort to find a good record.

I was too lazy to remove the price tags on most of my records. Like many of my albums, this one cost me $5, circa 2004

After I graduated high school, my collecting habits really exploded. I got a turntable as a graduation gift so I could play my own albums when I moved to Victoria for university. This move put me in close proximity to The Turntable and Ditch records. Suddenly, I could go to record stores whenever I wanted. Later, when I moved to Nanaimo, I went to Fascinating Rhythm every few weeks or so to pick up some new titles. I also continued to look for deals in thrift stores and bargain bins, which helped make my collection eclectic.

I drove my friends crazy. Shopping with me often meant spending at least half an hour in a record store or thrift store. A few fellow collectors shared my enthusiasm, but most friends imposed time limits on how long they were willing to stand there while I flipped through countless shelves and bins.

To be fair, that doesn’t mean they don’t support my hobby. Many good friends give me records. A friend here in Berlin gave me this Radiohead one, because it came with his CD and he doesn’t have a turntable.

My move to Berlin halted my collecting habits for a long time. I didn’t have a turntable when I first came here and I found records prohibitively expensive. I was not (and am still not) willing to pay 20 Euros for something that cost me $5-7 in Canada, especially when I had nothing to play it on. I finally bought a turntable in 2009 after I found a very attractive deal on Craigslist. I slowly started bringing over my beloved collection from Canada.

Some of my albums have crossed the world a couple of times. I bought this in Canada, but it originally came from Germany. I brought it back again.

Now, I’ve started collecting again, albeit much more slowly than I did before. There are deals to be found here if you know where to look. There is an oversupply of classical records and fewer people have interest in that kind of music, which makes them extremely cheap. Some flea market stalls offer them for two for a Euro. Germans also seem to have very little interest in radio rock from the ’70s, so artists like Elton John and Eric Clapton often end up in bargain bins. I’ve occasionally (and inexplicably) found cheap jazz and blues titles. I suppose hipsters aren’t into blues. I have an eye for the strange and quirky, so sometimes I end up with interesting purchases. 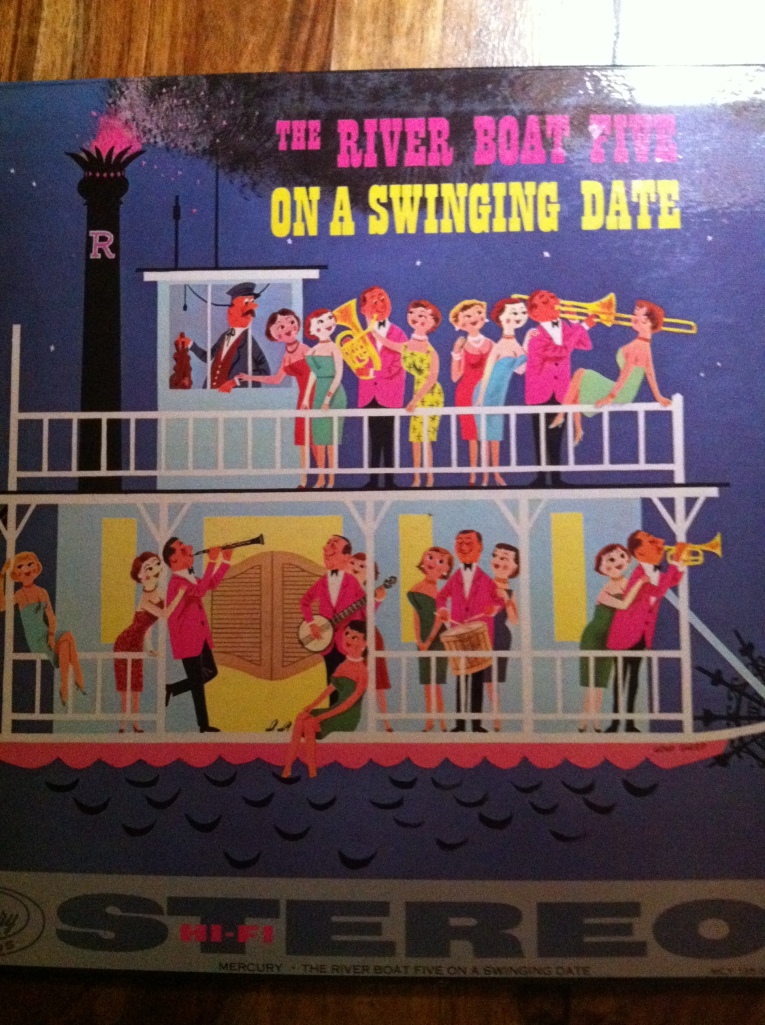 Like this one. I bargained it down from 2 Euros to 1 Euro. In a very “Berlin” sort of way, the seller told me “If you want to pay a Euro, pay a Euro.”

I continue to treasure my collection. There’s a skill to collecting vinyl that other formats lack. You can’t get any title you want whenever you want; you have to have patience. When you find something good, you have to make sure it’s playable, or you risk bad sound and wearing down your turntable’s needle. Because hipsters have picked up on record collecting, you also have to hunt harder for deals. It’s much more akin to treasure hunting than shopping. The time and effort I spend looking for records makes me value them all the more. 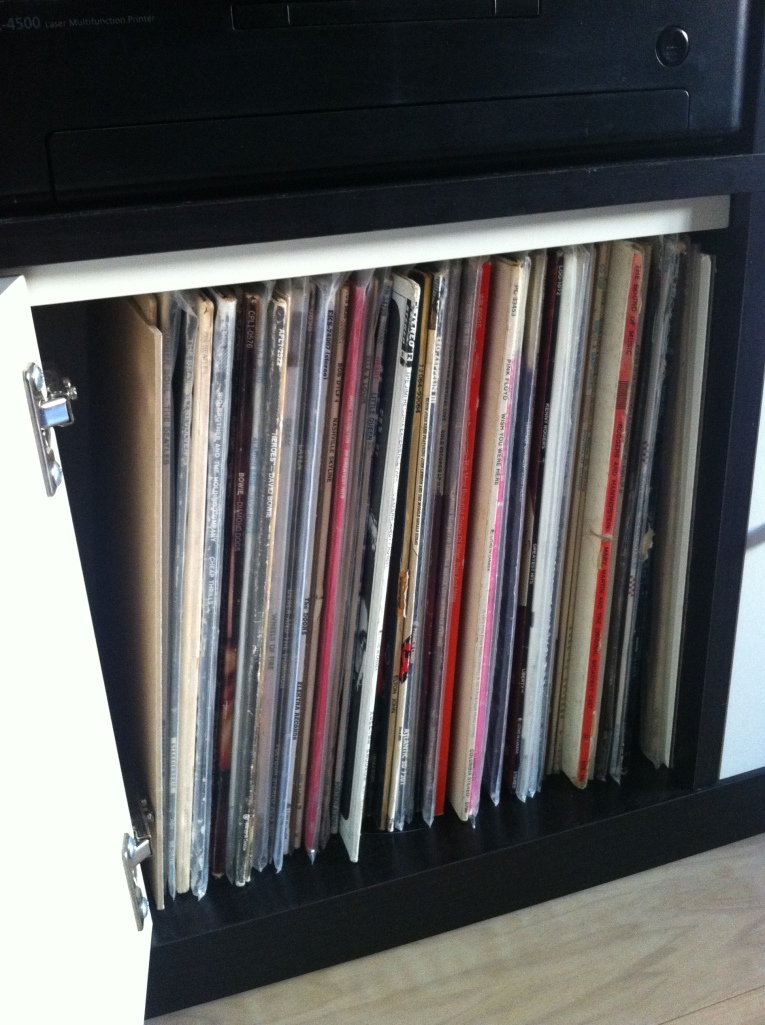 As of now, I have about 60 records here. This isn’t even 1/4 of my total collection

When you play a record, you can hear each speck of dust on the disk. They are also fragile and require a lot of care. You have to continually clean them, maintain your turntable, and store them properly. They’re heavy and they take up a lot of space. Basically, they aren’t remotely convenient, so I understand why they fell out of favour. Still, these things that make them different and inconvenient make them treasures to people like me. Maintaining a record collection is kind of like owning real silver cutlery; owning such a thing requires a lot of time and effort, but you feel like you have something of value that you can pass down. Who can say that about an mp3?

*I still do this.

**Full disclosure: I’m not really 100 percent sure about this. I know I got that record sometime that summer and that I got a record as a gift that year, but I could have also bought this copy at The Turntable during a trip to Victoria. Both stories sound totally plausible to me, so I just picked one and went with it. I do know that Electric Ladyland was my first record.