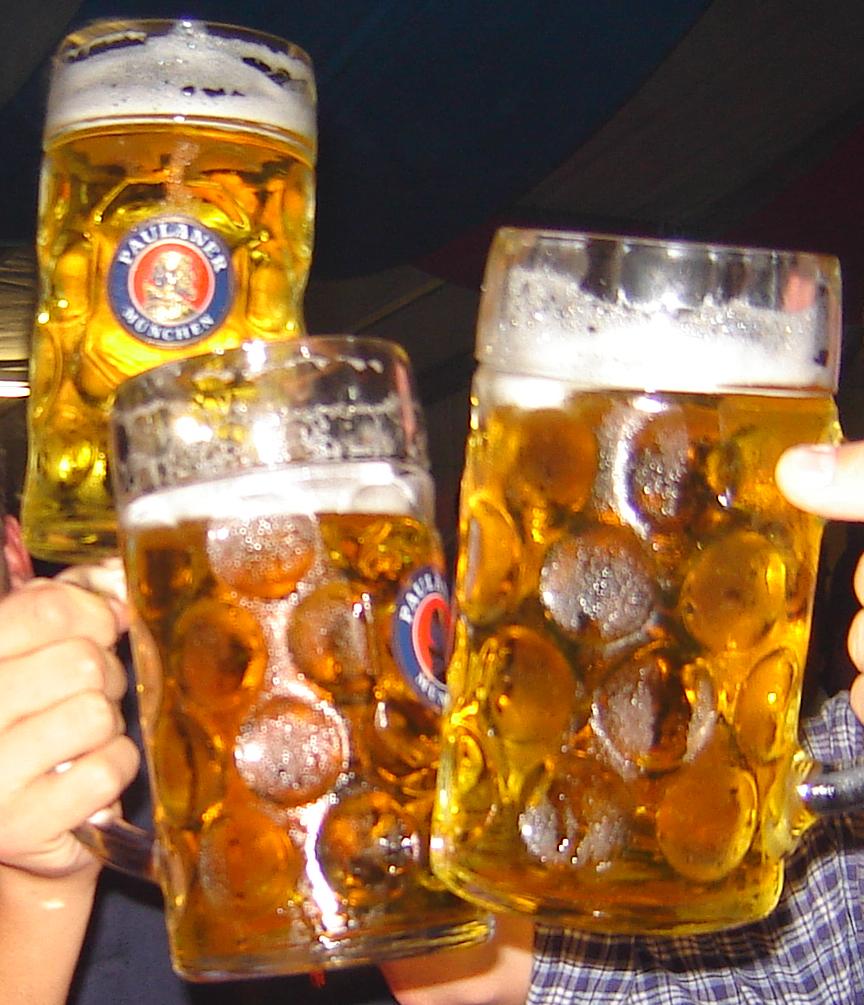 Like any country, Germany has its own set of weird beliefs and superstitions. When you first arrive in Germany, many of these may seem baffling. Why can’t you toast with water, exactly? Why are bread and salt acceptable housewarming gifts in parts of the country? Why on earth are chimney sweeps lucky? You will never believe most of these, but there are a few beliefs and superstitions that you will come to accept if you make Germany your home. Here are a few of them.
1. You must always look people in the eyes when you clink glasses
Whether you are toasting at a dinner party or drunkenly clinking glasses in the middle of the night, do not forget to look everyone in the eyes as you do it. Apparently, if you don’t, you will have seven years of bad sex. I don’t think anyone actually believes this, but everyone still follows the custom, just the same. When someone doesn’t look me in the eye when we clink glasses, I somehow feel awkward and weird, even if I’m visiting Canada (where this totally isn’t a thing). Oh, and do not toast with water. It’s a death wish…seriously.
2. You may not give knives or scissors as gifts
Gifting knives and scissors is totally bad luck. To do so is to wish an entire household injury and death. I didn’t know about this one for years, because it doesn’t come up much. People usually don’t give each other knives of scissors as gifts and as a foreigner, it’s not something you notice. Then, one year, I asked my mom for some thread clippers as one of my stocking stuffers. My mom was born in Germany but grew up with Canada, so as much as she embraces Canadian traditions like stockings, she still holds onto a few German superstitions. I got the thread clippers, but they came attached to a card telling me that they were not a gift and that I owed her 10 cents for the sale. While you can’t give sharp objects as gifts, you can “sell” them to the recipient for a very cheap price. My mom told me that the knives they got from her family for hers and my dad’s wedding were technically “sold” to them for 25 cents. As much as I found this odd, I paid her the 10 cents for those thread clippers.
3. Never say “Happy Birthday” to someone before their birthday
If you want to make a German person very uncomfortable, say “Happy Birthday” to them before midnight on the day of their birthday. It’s basically like wishing them bad luck for the rest of the year. Because of this, Germans usually celebrate their birthday on the weekend after the date if their birthday falls on the weekend. If their birthday falls on a Sunday, they usually do “Reinfeier,” which is when you celebrate through the night but don’t observe the “birthday” part until midnight. I didn’t buy into this at all when I moved here, and I’m pretty sure I celebrated my 24th birthday early. But now that I’m turning into a German person more and more every day, I will never wish someone a happy birthday before their birthday, and I cannot celebrate my birthday before the day. I don’t know why, exactly. It just feels very wrong.
4. Frühjahrsmüdigkeit
“Frühjahrsmüdigkeit” (Spring Tiredness) is a physical condition that seems to only affect German speaking countries. It’s like the exact opposite of spring fever. Instead of feeling energetic and a sense of renewed vitality, you feel tired, dizzy, headachey, and sluggish for a few weeks at the beginning of spring. It’s a widely accepted condition; you will see posters for it in your pharmacy and your doctor may tell you that you have it if you come in with fatigue in the spring. When you first move to Germany, your response will probably be “What kind of quackery is this?” But after a while, you may find that you, too, suffer from Frühjahrsmüdigkeit. When I came to Germany, I was convinced that it was some kind of mass delusion. Now, I’m pretty sure it’s real. Around March, Germany gets some pretty drastic weather changes, and all those changes in air pressure actually can cause those symptoms. On the plus side, it usually doesn’t last long and those longer daylight hours help give you energy to adjust to the change.
5. You must always say “Goodbye” when you leave
You might notice that in Germany, people tend to say “Goodbye” when they leave an office or shop, even if they don’t know anyone there or no one is really listening. This is because it is considered rude to leave without saying goodbye. If you are somewhere where you know everyone, you should be sure to say goodbye to everyone personally before you make your exit. If you are leaving your doctor’s office or a small shop, it is polite to say a quick “Tschüss” as you walk out the door. Of course, this isn’t always expected nowadays. No one expects you to say “Goodbye” as you walk out of H&M or a supermarket. It’s mostly reserved for closer quarters.